Joe and his amazing ears are really starting to show personality. This dog is turning into a stubborn clown that loves attention. He’s been here for a month now and is settling in well. He and Daisy are playing well, and having back yard races. The cats have figured out how to bully him when they’ve had enough. And he and Daisy are tag-teaming to get me up early.

Joey has ears for every mood and for every thought. 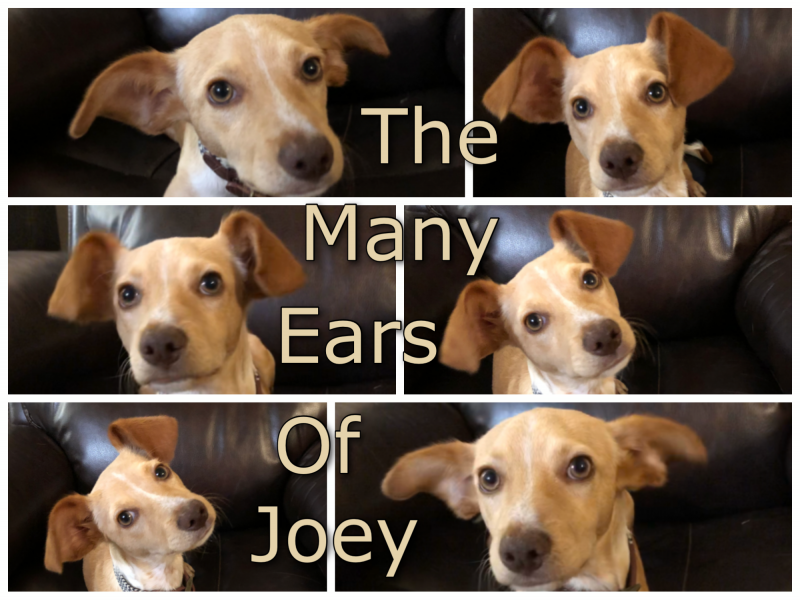 And the most entertaining slow-mo ears ever.

I’ve had a 3 legged cat for 7 years now and my Tripawd puppy for 3 weeks. Am I the only one that still sees one of my animals limping and almost panic wanting to know what’s wrong? I don’t know how many times I see Sully out of the corner of my eye and want to know why he’s limping. 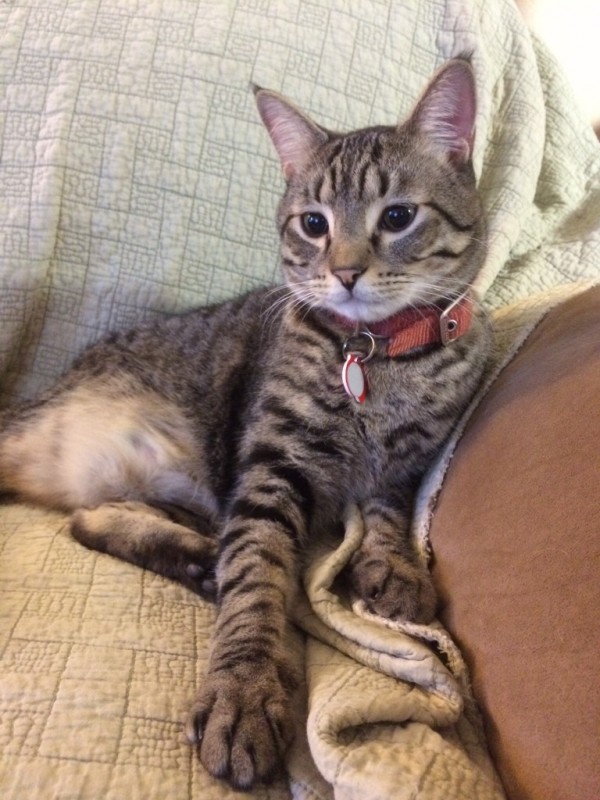 I did the same thing yesterday with Joey. That instant panic of “what’s wrong” and the duh moment of realization. I just really need to know I’m not alone. 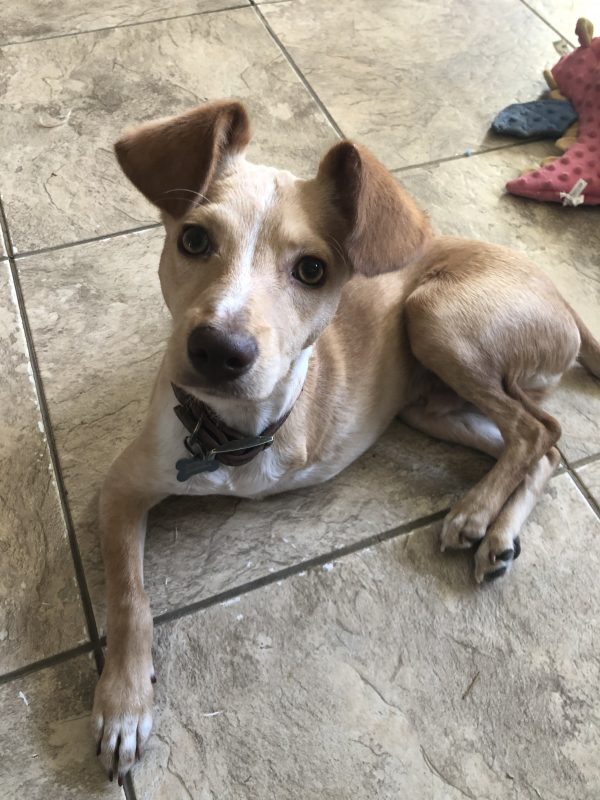 I know there are a lot of harness options out there and a several of them work great for tripawds. Joey came up to Idaho from the Mexico border in Texas so I know he’s used to much warmer weather.  I wanted a jacket that would keep his amputation site warm without a seam over it. I started designing this before I ever saw Joey in person and made multiple different patterns. Finally I was able to create one I’m happy with. 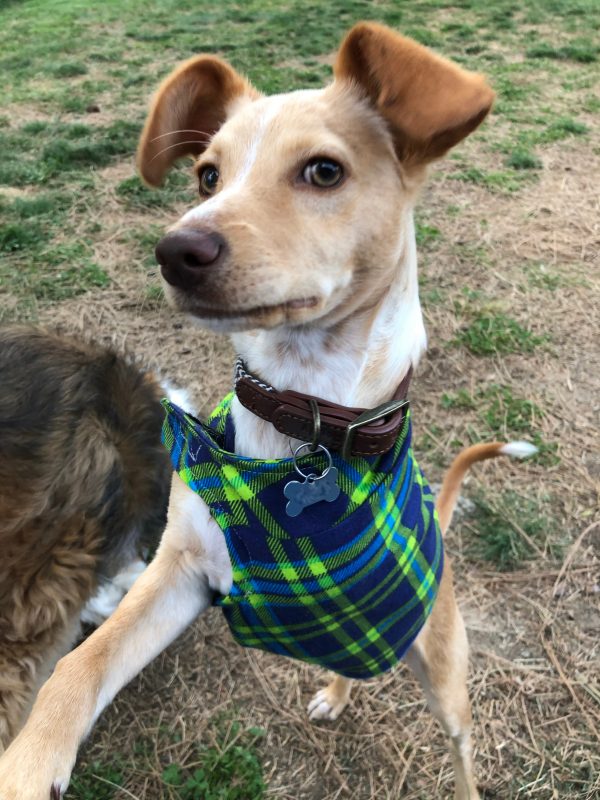 This design is a single  piece so there is no seam on his site and it’s easy to make. I can add padding if needed and it’s easy to put on and off. Because this one fit so well, I added some strapping and will use it as a harness. This combines the Jacket/Harness that I was wanting. 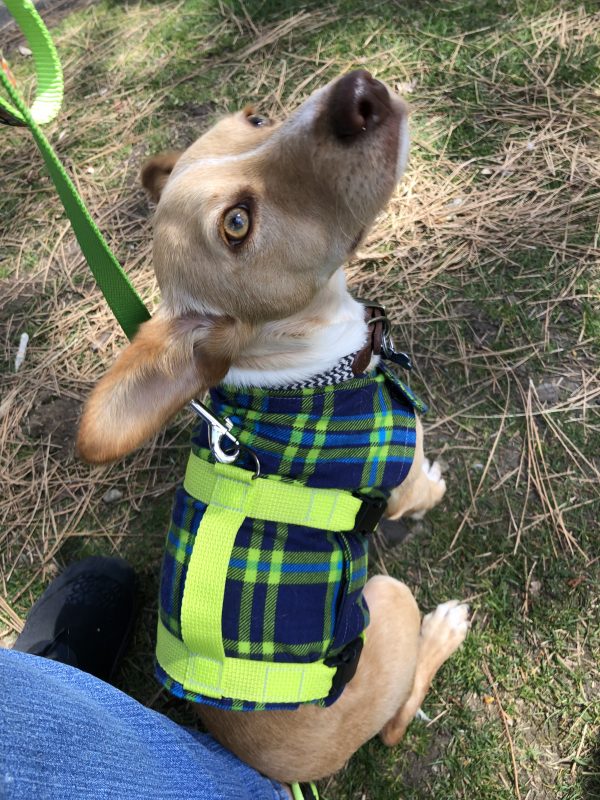 I took Joey to the park to try and socialize him and realized how nice it is to have the handle on a little dog like him. He had no fear being picked up by that handle and it is very supportive.

Now I need to make a summer version.

I will share the design with anyone else that want’s to try and make one.

Joey was found as a 5-6 week old puppy with a damaged paw. I have never learned if he had siblings or what happened to his mother. What I do know is he was in an industrial area and they presume it was crushed. 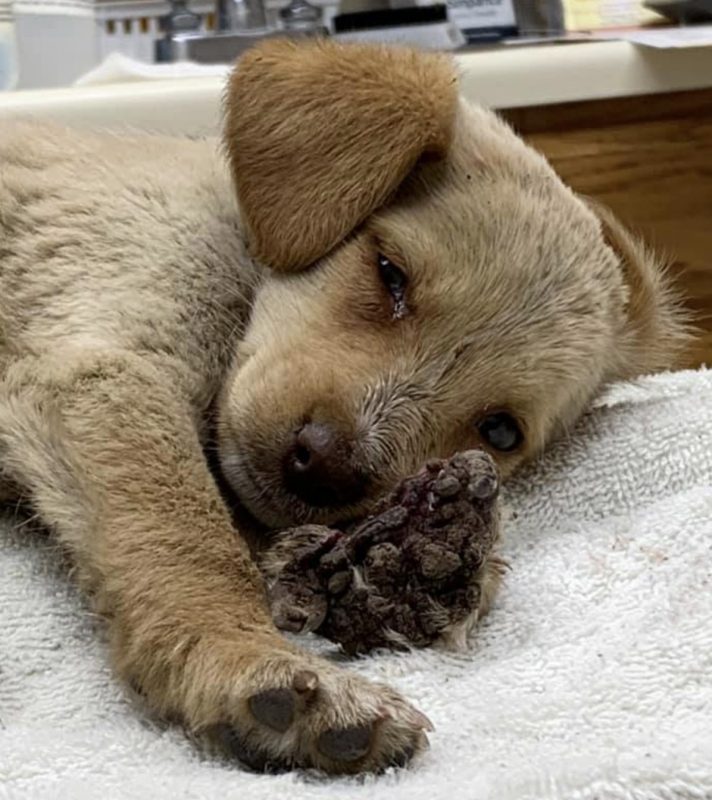 The rescue worked for 8 weeks to heal him up enough to amputate the limb, and another 6 weeks after that before he came to me. 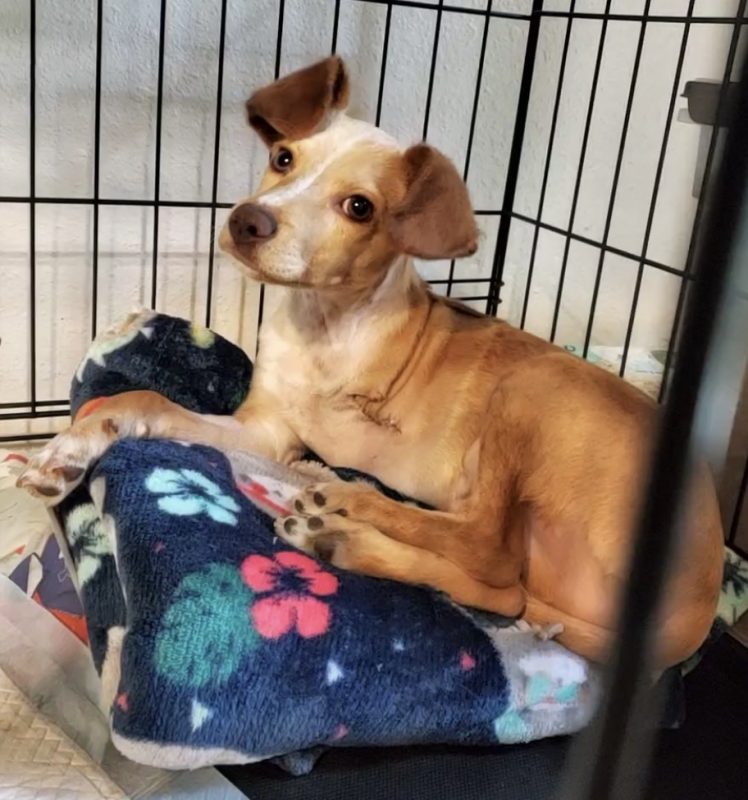 Now he gets the chance to try and be a real puppy. 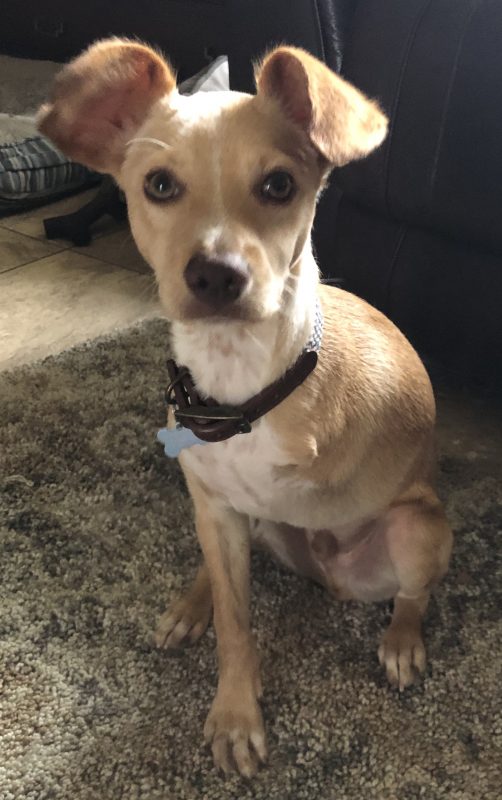 When I first got him home I noticed that he wasn’t standing as straight as I felt he should. I would not allow him to play too rough or run much, but he soon strengthened that leg and is standing straighter and running better. Fortunately my older dogs are happy to tolerate puppy behavior and are willing to tell him no when needed.

Now we get to work on his socialization and manners.

It’s been several years since I lost my first tripod, Honey, she was an awesome cat.  I still have Sully, Tripawd kitty, and Teddy, my one eyed kitty and I just added a Tripawd puppy to my house. He’s a little darling thing with ears that express every range of his emotions.

As a quick recap, Sully and Ted are fine. Teddy still has his issues and health weaknesses and I don’t expect him to survive for another year, but he’s still happy. Sully is normal kitty, he really is kinda a ”typical” cat type of personality. To introduce myself, I am Kelly, and I share my house with my mom. Between the two of us we have 6 cats and 3 dogs. In February of this year I lost my dog to prostate cancer, the other two dogs are moms so I was wanting one of my own. I’ve never had a “lap dog” of my own as I’ve always had bigger dogs that think they are lap dogs.  Mom has a little terrier mix,

Daisy,  that we got through a rescue that took her out of a kill shelter. Takoda is a Collie/Cocker mix that was sibling to my dog Pardner that passed.

Anyway, enough rambling. I have returned to this site to introduce the newest member of our household. A couple weeks after Pard passed I was wanting a dog so I started browsing petfinder. I work night shift and sometimes at work I have time to brows the internet. One day while sleeping I had a dream that I was holding a little brown dog that was missing his left front leg. That night while on petfinder I came across a little brown dog missing his left front leg.

I think I scared my coworker because I gasped so loudly, it was the dog I had dreamed of. Of course I put in the application immediately.  I went through the rescues photos and learned that he had been found in mid-December as a 4-6 week old puppy with his paw crushed. It took them 2 months to get him healed and healthy enough to amputate, they amputated the same day I had put my dog down.

As rescues are they were busy and it took a few weeks to get approved but the petfinder profile had said he would come up to my area in April, with no specific date. I needed to take some time off from work so, gambling, I took 2 weeks off in the middle of April. Fortunately we were able to schedule transport for late March.

He’s been here 3 weeks now and has settled in expertly. I’ve named him Joey because he looks like a baby kangaroo. He’s a clever, cuddly, pesky little doll who is just now learning how to be a puppy.

Ok, I know it’s been a long time since I posted on here, sorry about that. Honey was a special personality that still is severely missed. Its coming up on one year since I adopted Sully, the other tripod kitty. He is doing wonderful, spoiled rotten and happy. 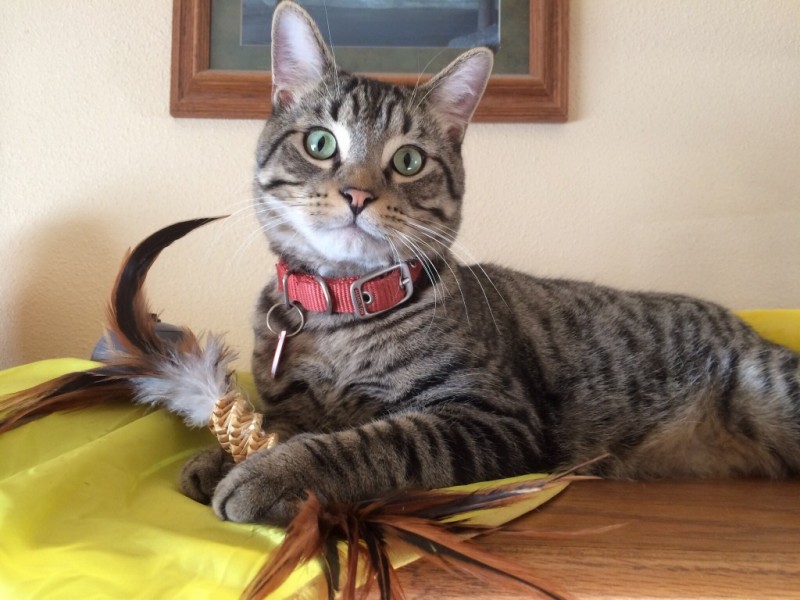 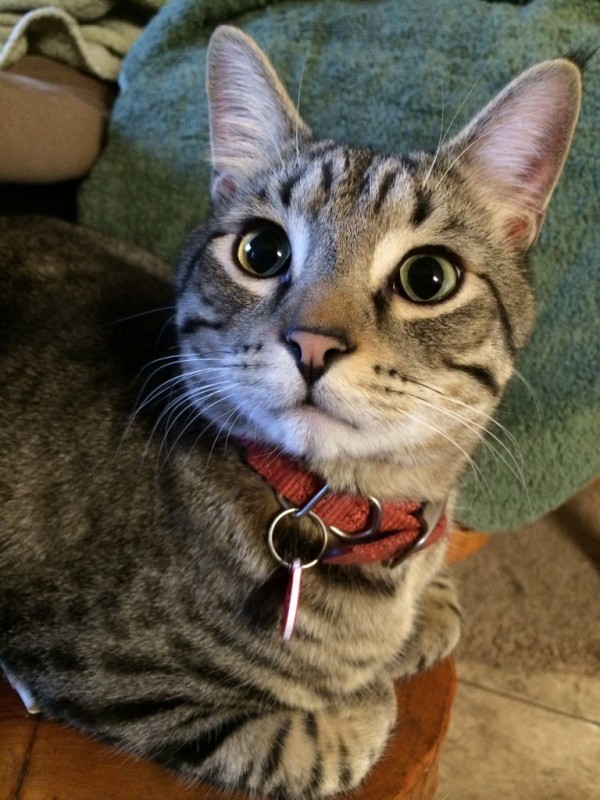 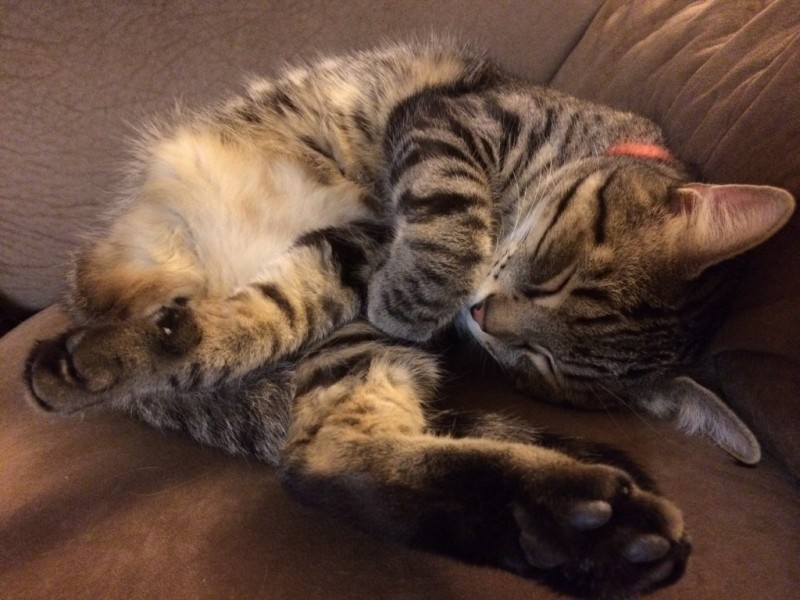 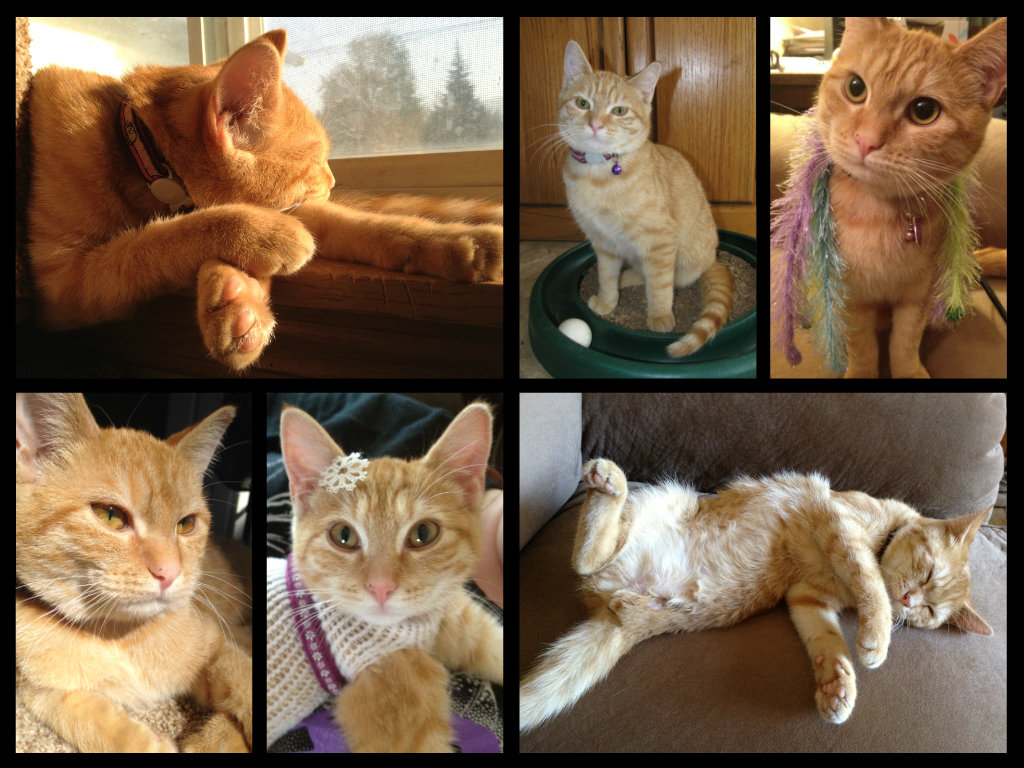 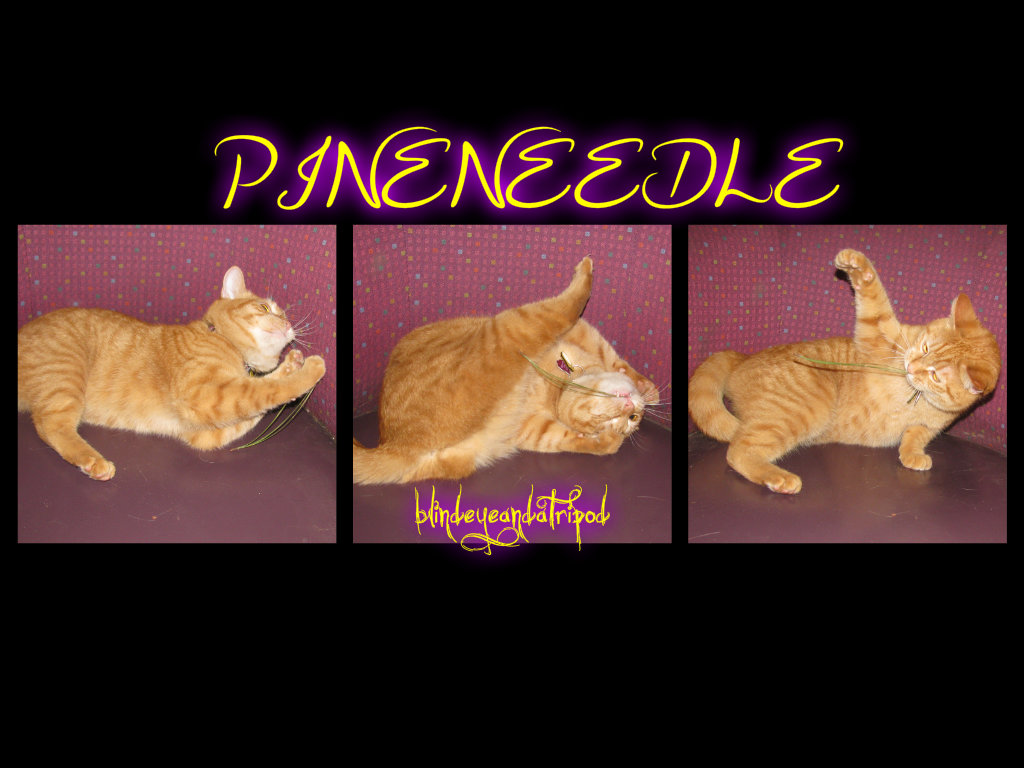 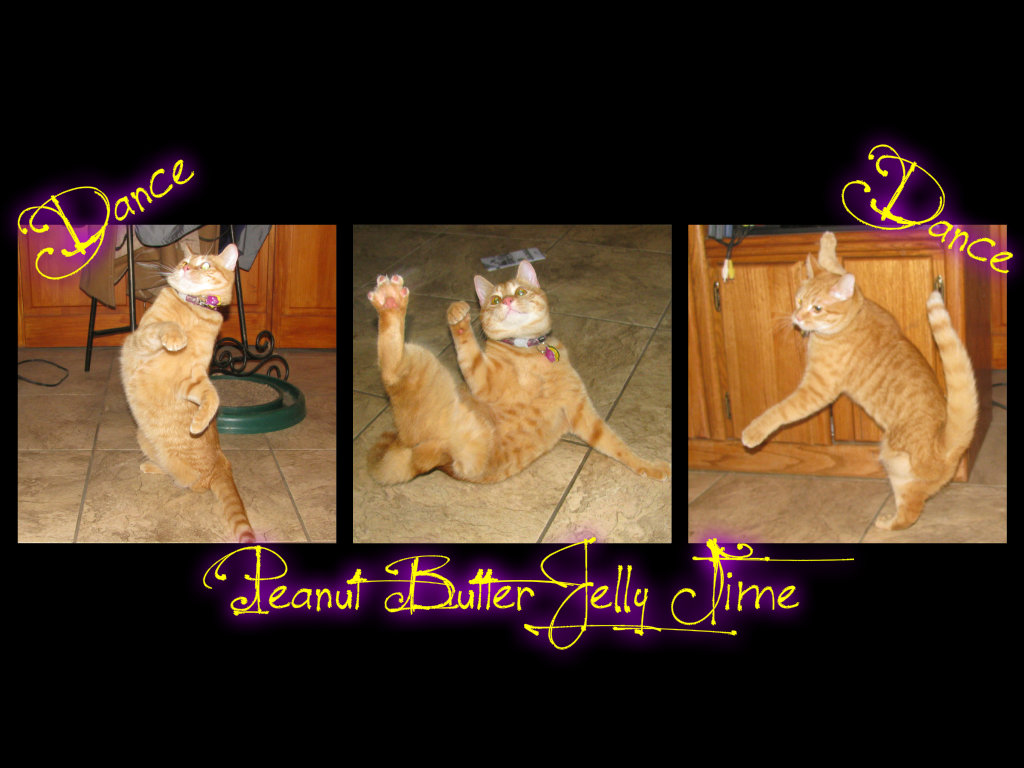 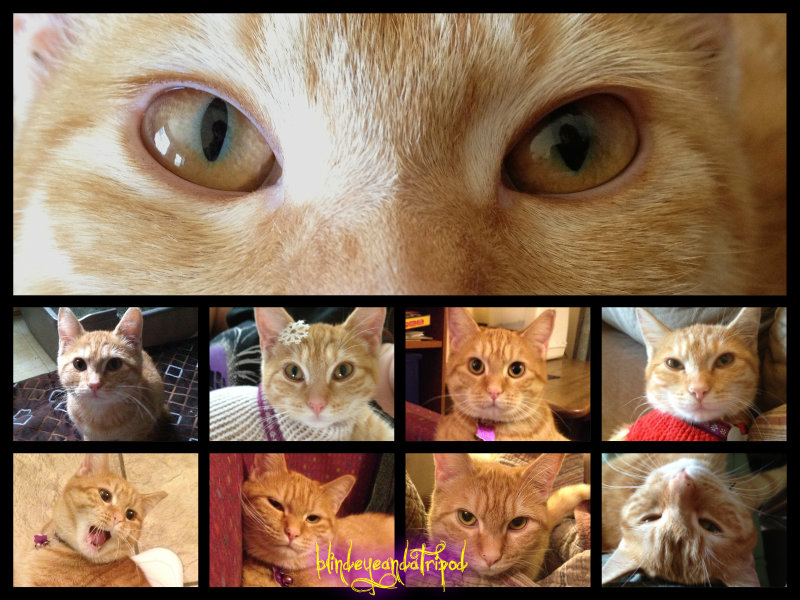 We have added another tripod to our household. Sully was found along side the road with his right back leg shattered in 3 places. The animal control officer that picked him up dropped him off at the pound and recommended euthanasia. The vet on hand decided he was worth saving so she amputated his leg. Sully came home 2 weeks later. Honey and he love to have 3 legged races every evening. 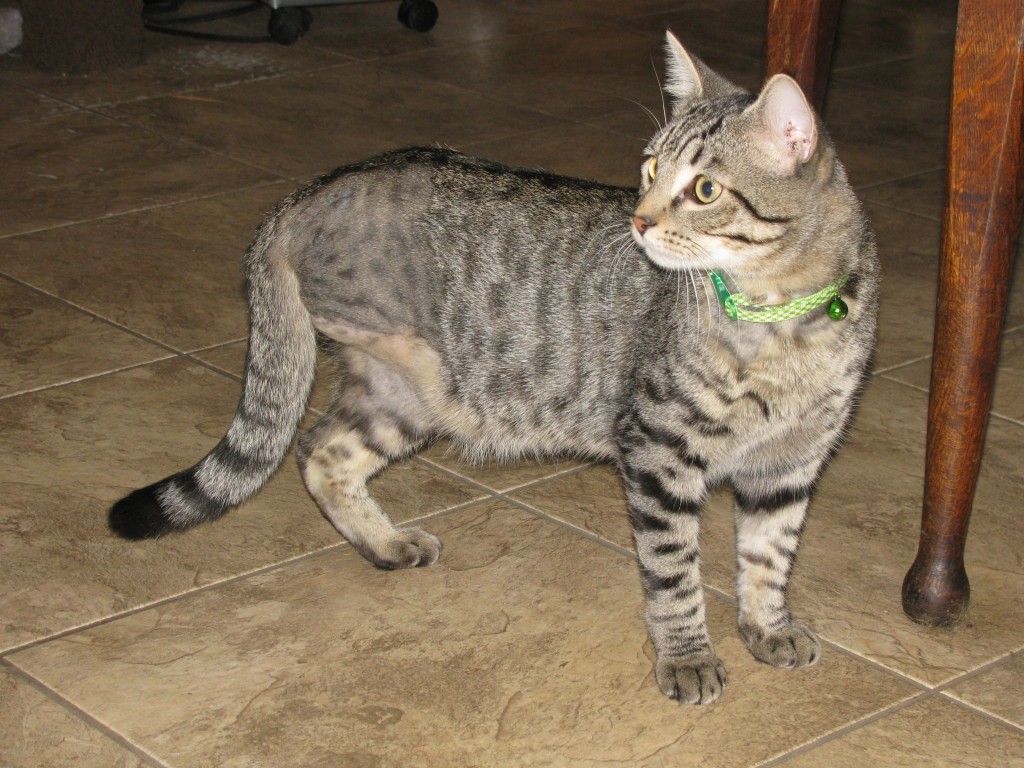 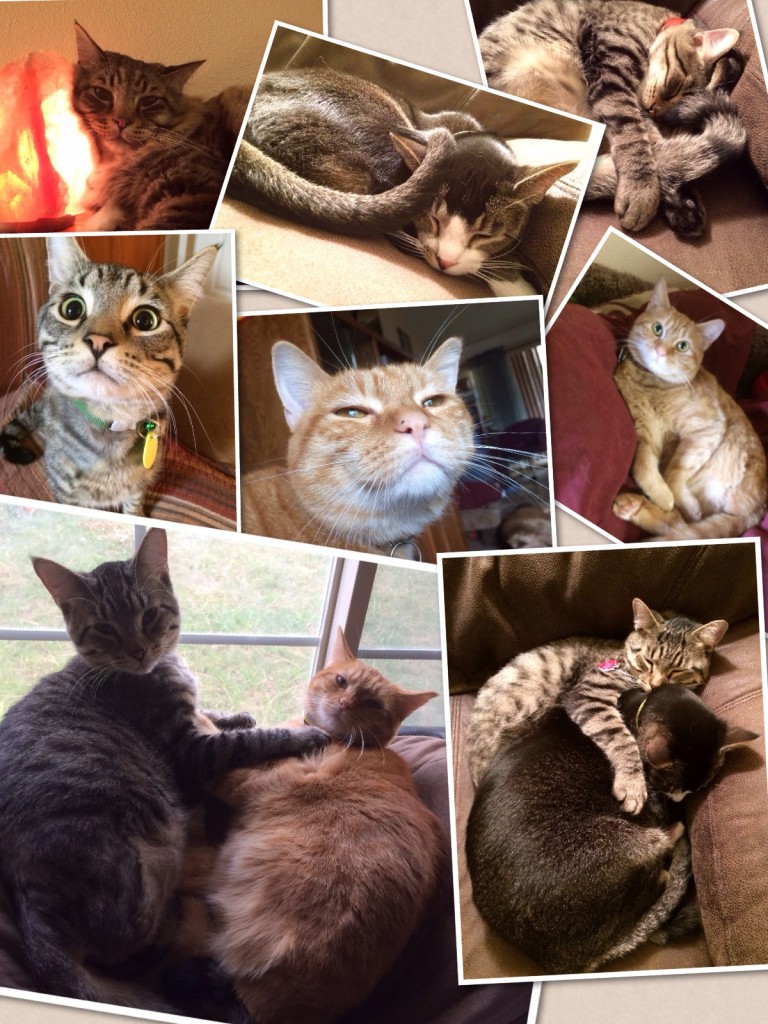 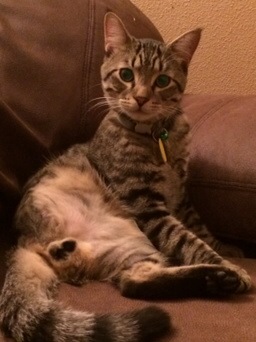 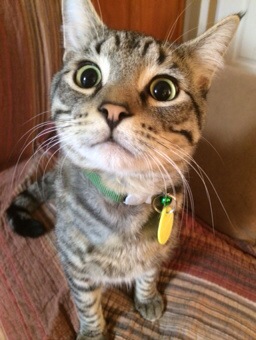 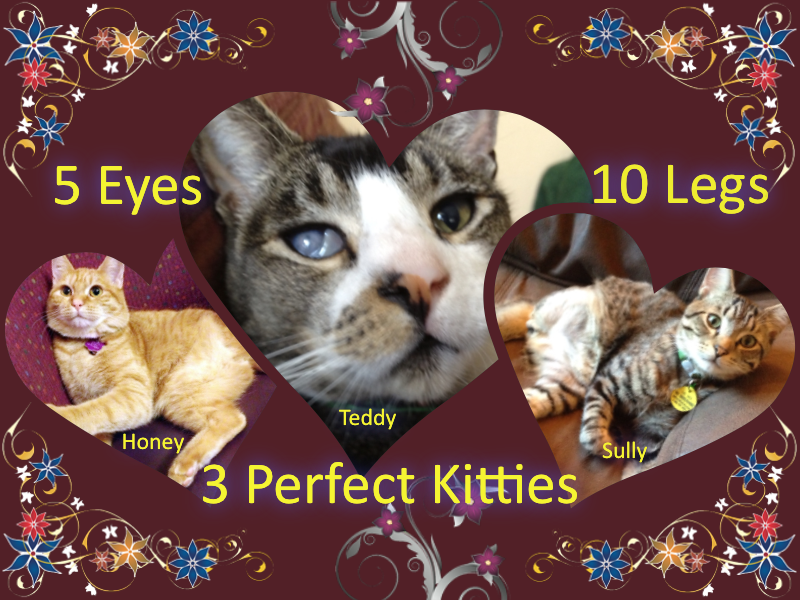 9 days before I was found in a driveway with all the skin ripped off of my leg. I had crawled up into something called a car because it was warm and I thought safe, until it attacked me. I was taken to a vet who worked for 9 days to save my leg, but it was dying so they took it off.

I don’t miss my leg too much, except when my shoulder on that side itches. I can outrun all the other critters here and Meowmy made me some stuff so I can climb up where I can’t jump.

I’m a happy kitty and I just want everyone to know that just because a critter may not be what you consider “Whole” they are not missing pieces. 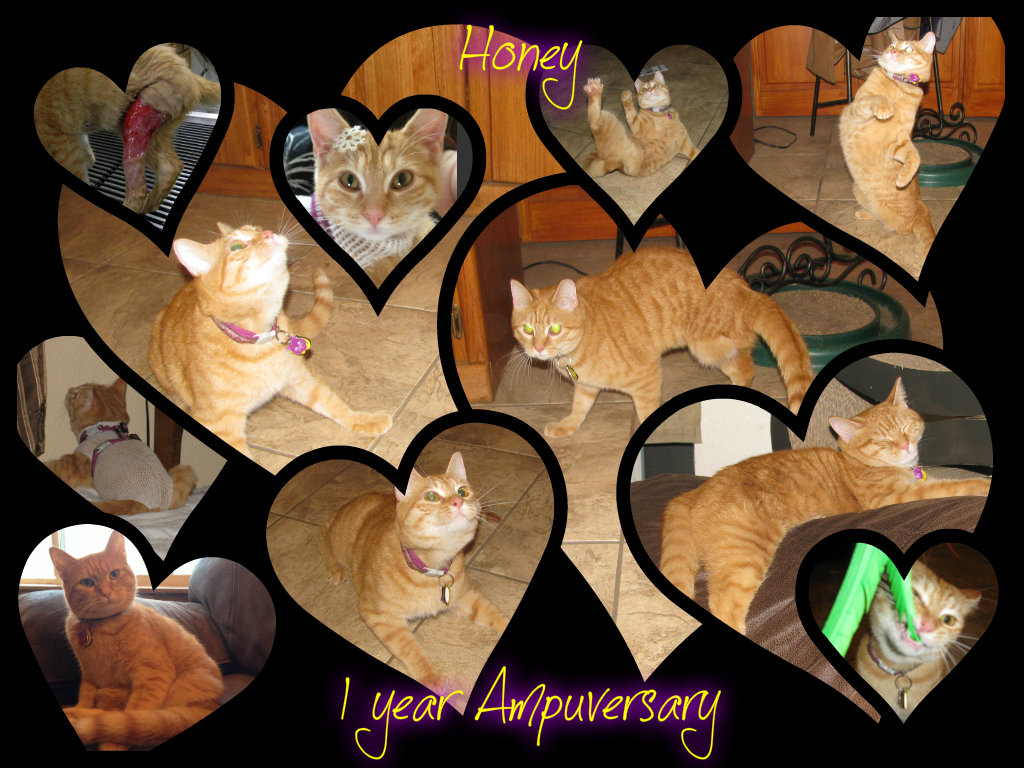 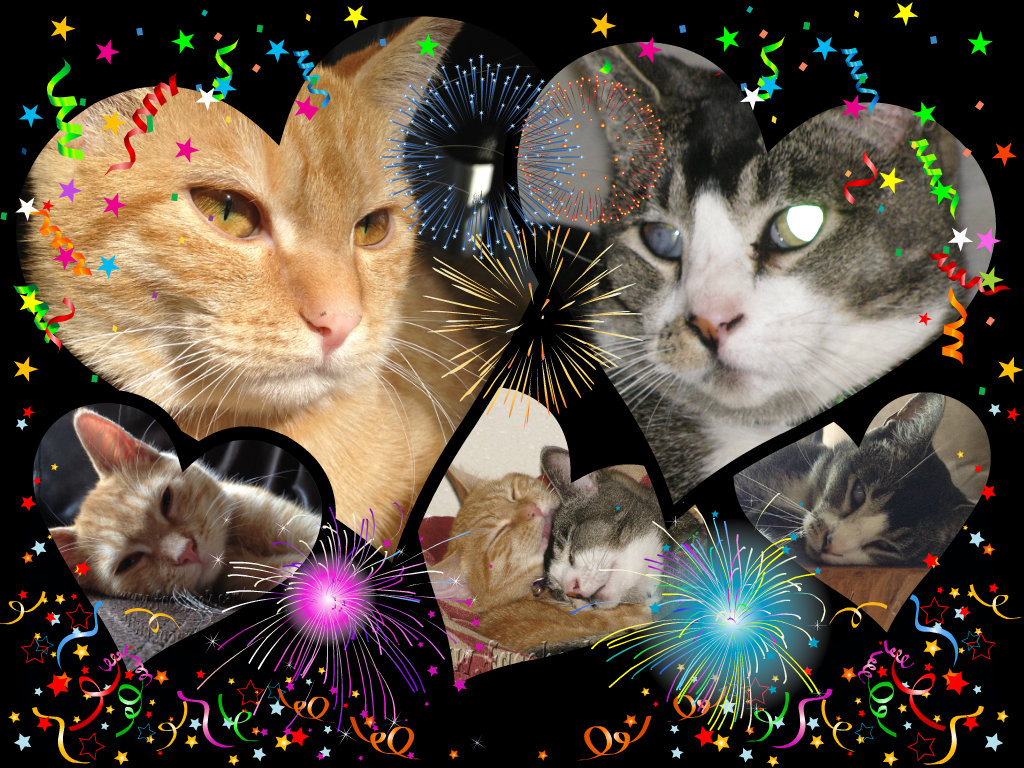 A Blind Eye and a Tripod is brought to you by Tripawds.
HOME » NEWS » BLOGS » FORUMS » CHAT » YOUR PRIVACY » RANDOM BLOG